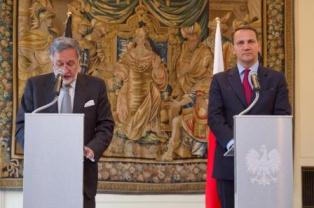 In all meetings, both sides underlined the historic and close bond of friendship and cooperation between Afghanistan and Poland.
Dr. Rassoul and his Polish counterpart, Foreign Minister Radoslaw Sikorski, announced the intention to develop and sign a bilateral cooperation agreement between the two countries in the near future.
“The bilateral Afghan-Polish cooperation agreement will further strengthen, deepen and broaden cooperation between our countries in the political, economic and social realms,” said Dr. Rassoul.
Both sides expressed satisfaction at the progress of the transition process so far, and at the growing capacity and capabilities of Afghan national security forces to increasingly assume responsibility for the security and defense of Afghanistan.
Both sides also emphasized the importance of mutually beneficial economic and trade cooperation, and agreed that business delegations from both countries will exchange visits to explore potential areas of investment in Afghanistan for Polish companies.
Dr. Rassoul conveyed the gratitude and appreciation of the Afghan government and people for Poland’s steadfast support to Afghanistan’s security, stability, development and young democracy.
“Please allow me to take this opportunity to express the ever-lasting gratitude of the Afghan government and the Afghan people for the goodwill, the close bond of friendship and especially for your assistance and the sacrifices of your soldiers in the cause of Afghan security and development,” he said at a joint press conference with Mr. Sikorski in Warsaw.