·          Foreigners can lease real estate, for periods up to 90 years for arable land or longer for non-arable land

1. The company must verify its necessary documents at the embassy/consulate of the Islamic Republic of Afghanistan in the residence country through a letter addressed to the MFA. In the absence of the Afghan Mission, the company must provide an introduction letter from its respective embassy or commercial attaché in Kabul.

2. The above-mentioned letter should contain information about the president, vice president and legal representative and the request regarding opening a new company or a branch in Afghanistan.

3. All submitted documents must be authenticated by the Afghan Embassy/consulate in the respective country or by the company’s consulate /commercial attaché in Kabul and verified by Consulate Directorate of the Ministry of Foreign Affairs of Afghanistan.

4. The registration form issued by Directorate General for Economic Cooperation of the MFA should be filled out and signed by the president, vice president or legal representative.

5. Brief background information of the company and future plans /activities in Afghanistan should be attached with registration form.

6. All above aforementioned documents should be submitted in two sets (original and copy). Once the procedure is completed the company will be officially introduced (within 24 hours) to the Ministry of Commerce and Industries for the issuance of business license.

Note: For more details or questions please contact the Economic Cooperation Department at +93202100374

Source: Official website, Ministry of Foreign Affairs of the Islamic Republic of Afghanistan
Toursim:
•    Toursim in Afghanistan
•    Places of Interest
Toursim in Afghanistan:
Tourism in Afghanistan was at its glorious best in the 1970s. Over 90,000 tourists visited Afghanistan from all over the world to see the unique beauty of the Country and experience the treat of one of the most hospitable group of people. Today, despite decades of war, Kabul remains a fascinating city that embraces both the old and the new. With the ever increasing presence of the international community and the ongoing redevelopment projects, Kabul has been given a touch of modern architecture that gives the city hope of a peaceful and prosperous future.
Afghanistan has a history of more than six thousand years, with many historical sights and attractions, among these are the more than two thousand year old famous Buddha Statues, the tomb of Hazrate Ali (the son in law of Prophet Mohammed p.b.u.h and the fourth caliph of Islam) in Mazar-e Sharif, the beautiful city of Balkh (also known as the Mother City of all Cities), the lakes of Band-e Amir, the deep lapis lazuli blue of the waters are a shocking contrast to the plain colours of the surrounding mountains.
Afghanistan has also been of great strategic importance for invading armies, from Genghis Khan to Alexander the Great. All these armies have left astonishing trails behind, trails that have been forgotten due to decades of war but are yet to be discovered. The Government is working to rebuild the war torn infrastructure of Afghanistan, a major project to develop transport links and a nationwide telecommunication link between Kabul and the other provinces has being established.
Furthermore, to assist the Tourism Industry of Afghanistan, the Government strongly encourages and offers its full support to the private sector to invest into the Tourism Industry. With ever increasing global tourism, the Afghan Tourist Industry has tremendous potential to become profitable. The Ministry of Foreign Affairs of Afghanistan is willing to support any attempt that will further develop the tourism industry of Afghanistan.
Places of Interest: 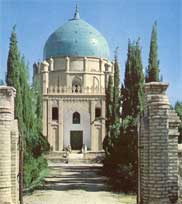 Mausoleums of Ahmad Shah Durrani and Mir Wais
LASHKARGAH-BOST
Lashkargah is the capital of the Helmand Province, built around the Helmand Arghandab Valley Authority which seeks to transform the deserts of the region into fertile fields as green as they were centuries ago before conquerors and anarchy consigned them to their present barrenness.
Ancient Lashkargah Bost, now lies to the south of the modern administrative town. Bost is recognized in the Zoroastian hymns of the AVESTA, in Achaemenid town lists and in 1st Century accounts. These references, however, are vague but there is no doubt that the citadel was taken by Arab conquerors around 661A.D. In the 9 th Century, the city grew to become the second city of the southwest. An Arab traveler in the middle of the 11the century describes the city as: " .one of the principle cities in the province of Seistan, except Zaranj, no city is larger. The inhabitants are polite and generous..It is a city well supplied with provision, fruits and dates." From the 11 th until the middle of the 12 Century, Bost prospered as the winter capital of the Ghaznavids, was burned and looted in 1151 by the Ghorids and then completely demolished by Genghis Khan in 1220.
Today the remains of the great palace of Mosoud still give the visitor an idea of the splendor of the court if what was then the greatest Empire of the East. The most remarkable monument is the magnificently decorated arch which has a span of 80feet.
HERAT
This history of Herat has been one of repeated destruction and reconstruction. Conqueror after conqueror, from the time of Alexander the Great, has taken it, destroyed it and then rebuilt it. In the 4 th Century B.C. Alexander the Great built the fort which is still standing in the center of the City. From 1040 to 1175 the city was ruled by the Seljuks who defeated the Ghaznavids and destroyed the fortress. Herat was then captured by the Ghorids until the city fell under the control of the Khwarazm Empire. In 1221, Herat was taken by the Mongols and Tuli, the son of Genghis Khan, who ruled for a time, but the citizens revolted and killed the Mongol garrison chief. Extremely angered, Genghis Khan rode upon the city with 80, 000 troops and besieged it for six months, leaving only forty people living. In 1245, Herat was given to the Kart Maliks. Tamerlane destroyed Herat in 1381. However, his son, ShahRukh, rebuilt it and started the cultural renaissance which made it the center of learning and culture. During the Timurid rule, the famous poet of Herat, Jami and the miniaturist, Behzad were born, Queen Gawhar Shad's Musalla was built and Gazergah restored. For the second time in its history, the city flourished. In 1718 the Afghan clan Chief Hotaki, struggled for Herat's independence which continued until 1880, when finally the city became an integral part of Afghanistan.
Photo Gallery of Herat's New face after the fundamentalist regime of Taliban
Major Places of Interest in Herat:
The Citadel:
This fort, originally built by Alexander the Great, suffered repeated attacks over the history, but still dominates the landscape of Herat. Held by the Ghaznavids, the Seljuks, the Ghorids, the Mongols, the Timurids, the Safavids and others, the citadel is a reminder of the times of kings, conquerors and great pageantry.
Masjide Jami:
This great mosque, in the center of the city has been a place of worship since the time of Zoroaster. Rebuilt several times, the mosque now stands in perfect splendor. 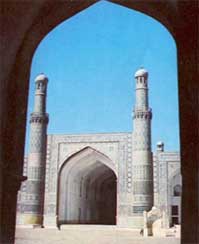 The Great Mosque, Herat
Gazargah:
The tomb of the famous 11 th Century poet and mystic Khaja Abdullah Ansari was restored by Shah Rukh in 1428. Inside the courtyard lies the tomb of Amir Dost Mohammad Khan.
Gawhar Shad's Mausoleum:
This mausoleum was built for Gawhar Shad, wife of Shah Rukh, youngest son of Tamerlane. The brightly colored, ribbed domes were very popular with the Timurids.
Jami's Tomb:
One of the greatest 15 th Century poets, Mawlana Nuruddin Abdur Rahman Jami, born in 1414, achieved widespread fame during his lifetime. He died in Herat in 1492 and is buried in a grave unadorned, save for a pistachio tree which has sprung from the tomb itself.
The Minarets:
Today, only six of the original twelve minarets remain of Queen Shad's great Musalla complex, built in the late 1400's. It was the Queen's contribution to the Timurid Empire during a period of cultural accomplishments. It consisted of a madrassa or place of learning and a musalla or place of worship. These magnificent buildings flanked by the minarets had been described at one time as the most imposing and eloquent structures to be seen in all Asia.
Charsuq:
Herat's Bazzars are full of fascination and color and were once an important trading centre at the caravan route from Europe to China. Today, items of interest to visitors include the famous hand-woven Herati Carpets and the beautiful and rustic blue glass produced by the traditional glass blowers of the city.
THE ROAD TO BALKH
The road to Balkh crosses the Hindukush via Salang Pass through the highest tunnel in the world (3363m). A drive over this pass offers, besides scenic beauty, a thrilling experience of high altitude.
En route about 240 km from Kabul (12 km from Pule khumiri) lies Surkh Kotal, site of a great religious temple, founded 130 in A.D. by Knishka the Great, King of the Kushans. It is one of Afghanistan's most important archeological sites, which was finally burned by the Hephthalites, nomadic rivals and ultimate successor to the Kushans. 70 km further north lies Aibak, the capital of the Samangan province. 2 km nearby is an important Buddhist site, dating back to the 4th Century A.D., locally known as Takhte Rustam (Rustam's Throne). Rustam, the hero of Firdausi's great epic, the Shahnama (Book of Kings), written in Ghazni around 1010, married the beautiful daughter of the King of Samangan, Tahma. The stupa cave crowns the hill in front of the monastery which was most probably destroyed by Hephthalites around 460 A.D. 60 km north is Tashkurghan (Khulm) with one of the last traditional Central Asian Covered Bazzars left in Afghanistan. A stroll through this bazaar is special interest. So are the Bala Hissar, the charming palace of Amir Abdur Rahman (Baghe Jahan Numa) and the tomb of Qilich Ali Beg, the most notable ruler of Khulm (1786-1817).
MAZAR-E SHARIF 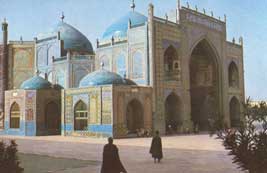 Statue of Buddha - Before

After it was destroyed by Taliban Extremists in March 2001
Major Places of Interest in Bamyan:
SHARE GHOLGHOLA
Bamiyan was destroyed by Genghis Khan in 1221 to revenge the death of his grandson Mutugen. The ruins of the citadel, called 'city of noise', still give evidence of its magnitude before the Mongol devastation.
SHARE ZOHAK
This mass of ruins was once a principle fortress, protecting the entrance to the city of Bamiyan during the reign of the Shansabani Kings in the 12th and 13th Centuries. It also was a victim of Genghis Khan's vengeance.
AJAR VALLEY
This beautiful valley, embraced by picturesque mountains of fascinating formations and glooming ever changing colors, with a clear sparkling stream, full of trout, leads into a breathtaking chasm and is an unforgettable site for every visitor. 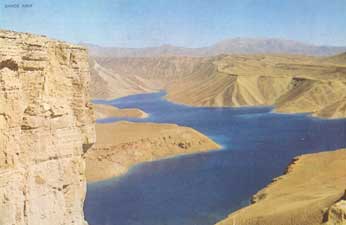 BANDE AMIR
Band Amir
Visitors to Afghanistan have marveled at the country's natural beauty. The formidable Hindu Kush, the vast Turkestan plains, and the seclusion of the southern deserts have impressed travelers from Alexander the Great to Marco Polo. It is the unspoiled natural beauty that forms the visitor's first and most enduring impression of the country. But of all the natural wonders of Afghanistan, the lakes of Bande Amir are perhaps the most out-standing. Situated in the mountainous Hazarajat at an altitude of approx.3000m, 75km from Bamiyan, these majestic blue lakes are of legendary beauty.
MINARET OF JAM (Central Route)
Minaret of Jam
The Central route from Kabul to Herat is undoubtedly a fascinating experience but should only be undertaken by adventurous or pioneering travelers. Passing the first highlights, Bamiyan and Bande Amir, this route leads via Panjaw to Cheghcharan, the capital of the Ghor province. The road continues via Sharak towards north, where in a lonely, remote valley, closely surrounded on all sides by towering barren mountains stands the 65m high Minaret of Jam, at the southern bank of the Hari Rod River. Only the Qutob Minar in Delhi, built by Qutbundin after conquering India, is higher. It is the only well preserved architectural monument from the Ghorid period. En route to Herat, the Ghorid tombs of Cheste Sharif and the hot mineral springs of Obay are favored stopovers.