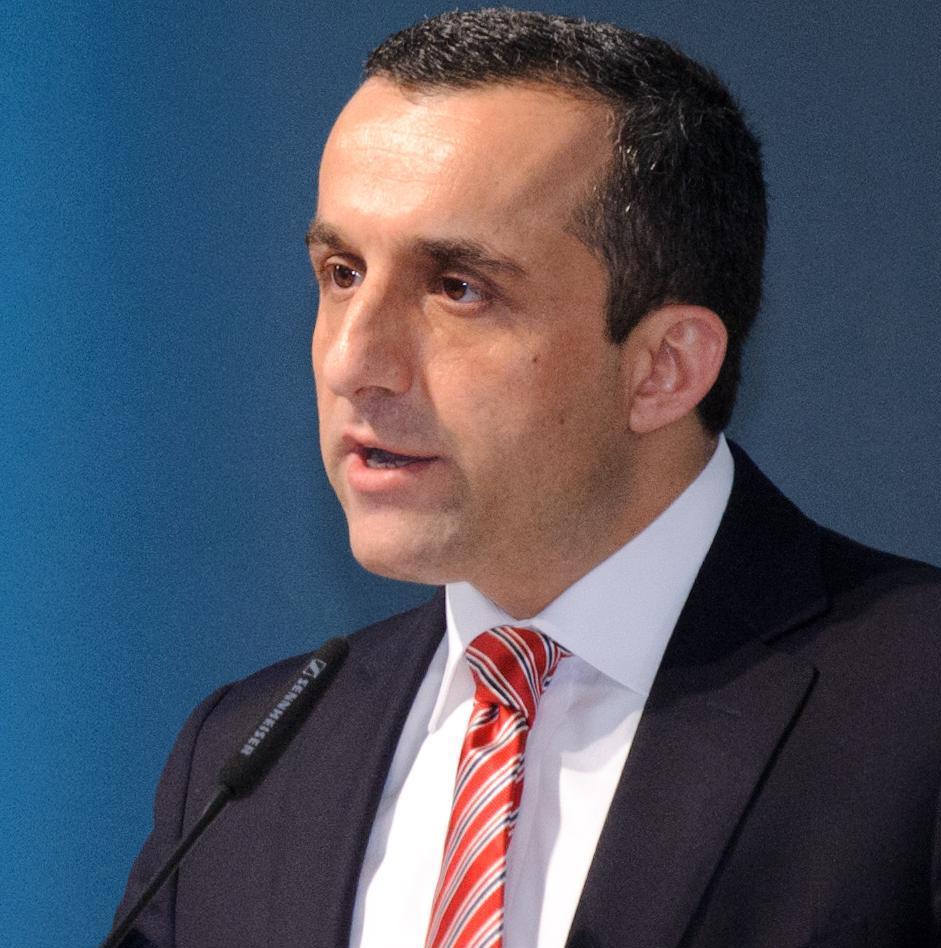 Biography
Amrullah Saleh was born 1972 in Panjshir.   In 1990, in order to avoid being conscripted into the Soviet-backed Afghan army, Saleh joined the opposition mujahideen forces. He received military training in neighboring Pakistan and fought under mujahideen commander Ahmad Shah Massoud.  In the late 1990s, Saleh was a member of the Northern Alliance (also known as the United Front) and was fighting against the Taliban expansion. In 1997, Saleh was appointed by Massoud to lead the United Front's international liaison office at the Embassy of Afghanistan in Dushanbe, Tajikistan, where he served as a coordinator for non-governmental (humanitarian) organizations and as a liaison partner for foreign intelligence agencies. 1999 he was sent to Cleary University, Michigan, USA, by Ahmed Shah Massood for training, as the opportunity presented itself, to the United States to receive advanced training in operations and tradecraft. He was part of the first group to go over there and receive training. It was an advanced operations. Advanced operations means targeting, assessment of the target, casing and planning an operation, execution of an operation, exploitation of documents, exploitation of the site, exploitation of the arrested target, and then analyzing it.
Amrullah Saleh was an interpreter for an NGO in Pakistan when the war broke out in 2001. His knowledge of the United States and his impeccable English, made him a perfect choice for CIA operators coming into the country and Saleh quickly found himself a new high-paying job, going from $400 a month, to $200 a day. When the war wound down, Saleh, found himself with lots of contacts, dual citizenship (he had lived in the US), and political ambition.

In 2003, the FBI, hot to break into the Afghan counter-terrorist ops club, started setting up shop in Kabul by throwing around lots of money. They aligned with Amrullah, used their State Department contacts to get Engineer Arif (a Massoud man and high-ranking member of the Northern Alliance) fired. Karzai, with the help of the FBI, now had control of the country’s intelligence service, and that meant he could decrease Panshir power and protect his Pashtun “former” Taliban appointees.

In February of 2004, Amrullah Saleh, already a senior NDS intelligence official, replaced Panjshiri Engineer Arif as the new head of NDS (National Directorate of Security) aka NDS (National Directorate of Security ). Saleh has a close relationship with the CIA that dates to Afghanistan's civil war in the 1990s. A former senior U.S. intelligence official said Saleh may have disagreed with Karzai's efforts to release some Taliban figures as a demonstration of his willingness to negotiate. "I can see Amrullah objecting to that," the former official said. "He was tough. He had a very clear view about what was required for security."

The former official said Saleh's departure is a blow to the Afghan spy service and is likely to be viewed as a setback within the CIA. "I would have viewed it as very bad news," the former official said. (20100606). He throughout had been in league with Indian Research and Analysis Wing (RAW) to destabilise Pakistan but has been recently ousted by Afghan President Hamid Karzai due to his dubious role in the affairs of the state. Amrullah has also assumed the task of creating difficulties for the Afghan administration. The story carried by the Sunday Times and so-called report against Pakistan’s Inter-Services Intelligence (ISI) by London School of Economics are the handiwork of Amrullah Saleh. Well placed diplomatic sources told The News that Amrullah Saleh has threatened his leadership that he would bring the peace fragility back in the region to the previous level since he was refused a free hand to play the Indian game in the region.

Amrullah has been brought up and groomed by the Indian intelligence organisation and he had been involved in anti-Pakhtun activities throughout his career.In late 2010, Saleh created one of the strongest Afghan pro-democracy and anti-Taliban movement called Baseej-e-Milli (National Mobilization) and Afghanistan Green Trend (AGT), with about 20,000 of his supporters rallying against the Taliban in Kabul in 2011. AGT with nearly 50,000 members enjoys 50 percent university graduates and students membership.

Amrullah Saleh, former spy chief of Afghanistan—national directorate for security (NDS) announced his support to the first frontrunner,
Dr. Abdullah Abdullah in the June 14 slated second round of the Afghan vote.

President Ashraf Ghani Ahmadzai has appointed Amrullah Saleh, former head of National Directorate of Security (NDS) as state minister for reforms in security sector. Saleh’s duties include advice to the president on appointment of new security officers, monitoring and implementation of a professional growth plan for high officers and giving advice on bringing about reforms in security departments.

Amrullah Saleh, the state minister for security reforms, on Tuesday June 13, 2017 resigned from his position. Saleh who previously served as the head of the National Directorate of Security (NDS) made his surprise announcement after having been appointed to the post in March 2017.

A group of armed militants launched an attack on the residence of the former intelligence chief Amrullah Saleh in Kabul city but no casualties were reported as the Afghan forces quickly repulsed the raid.(20181128)

Afghan acting Interior Minister Amrullah Saleh stepped down from his post on Saturday Jan 19, 2019 in order to run for the vice-presidency alongside President Ashraf Ghani who plans to bid for a second term in 20. July’s election.

A powerful explosion hit central Kabul yesterday, wounding Afghan President Ashraf Ghani’s first running mate Amrullah Saleh in the upcoming election and killing at least two others. At least 25 civilians were injured in the blast that occurred on a road near the private Ghalib University and Shahid Square, a four-way intersection, interior ministry spokesman Nasrat Rahimi said. Rahimi said that immediately after the blast, gunmen had entered the university building and were targeting the main political office of the vice presidential candidate, Amrullah Saleh. Saleh was wounded by shrapnel before being safely evacuated from the office of his Afghan Green Trend Party. The party office is located adjacent to the university.
Afghan Vice President Amrullah Saleh said half of his family members and office staff contracted the new coronavirus. In a social media post, Saleh requested the people to take the crisis seriously, follow safety and hygiene measures, and stay home.
Saleh is married and has five children.