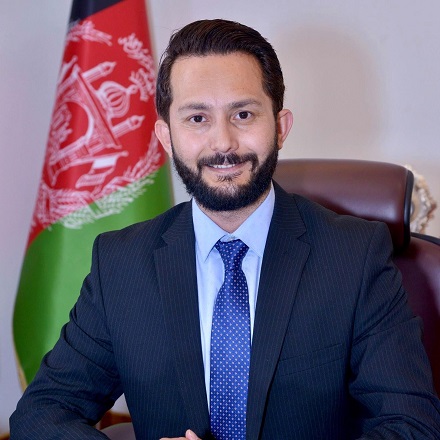 Ambassador Extraordinary and Plenipotentiary of the Islamic Republic of Afghanistan to the Republic of Poland.

Ambassador Qadiry is a multiple award-winning and globally recognized former journalist, possessing wide expertise, competence, and experience of working with various global media agencies like BBC. He holds more than a 19-year of experience in management, public policy development, media undertakings across various fields, content, and subjects. He hails from a milieu where he had been proactively and profoundly engaged in working with different government and non-government institutions. Before being appointed as an Ambassador to Poland, he served as a Minister Plenipotentiary, (Chargé d    ’ Affairs of the Islamic Republic of Afghanistan to India) for two years in New Delhi and as a non-resident CDA to Nepal, Bhutan, and the Maldives. Conterminously, he co-chaired the India-Afghanistan Foundation (IAF).

❖ Master’s in Global Governance and International Public Policy, University of London, the UK in 2017

❖ Course Diploma “Rhetoric: The Art of Persuasive Writing and Public Speaking”, Harvard University, Massachusetts, the US in 2020

❖  minister plenipotentiary, Charge d‘affairs at the embassy of the Islamic Republic of AFGHANISTAN, New Delhi, India (From May 2019 until March 2021 )

❖  BBC World Service, reporter/documentary maker based in London - From 2008 until 2015

❖  Awarded with the prestigious One World Media Awards, the equivalent of Oscars in Media, in London for being a “New Voice” in journalism and leadership for my creative and in-depth analysis on Afghanistan.

❖  Awarded the Utlesat Award for “Best Documentary of the year” in Venice, Italy.

❖  Have produced/directed/presented more than 10 award-winning documentaries

❖  Awarded Runner-up of the “New Comer” Award by the BBC.

❖  Awarded by the Afghan Minister of Health for my social activities in awareness programmes to counter-narcotics and addiction.

❖  Frequently participated in many important national and global conferences as an observer and analyst such as the Warsaw and Brussels Summits on Afghanistan.

Ambassador Qadiry has written many Op-Eds and articles for well-known journals and publications.
You can search under his pen name: Tahir Qadiry.