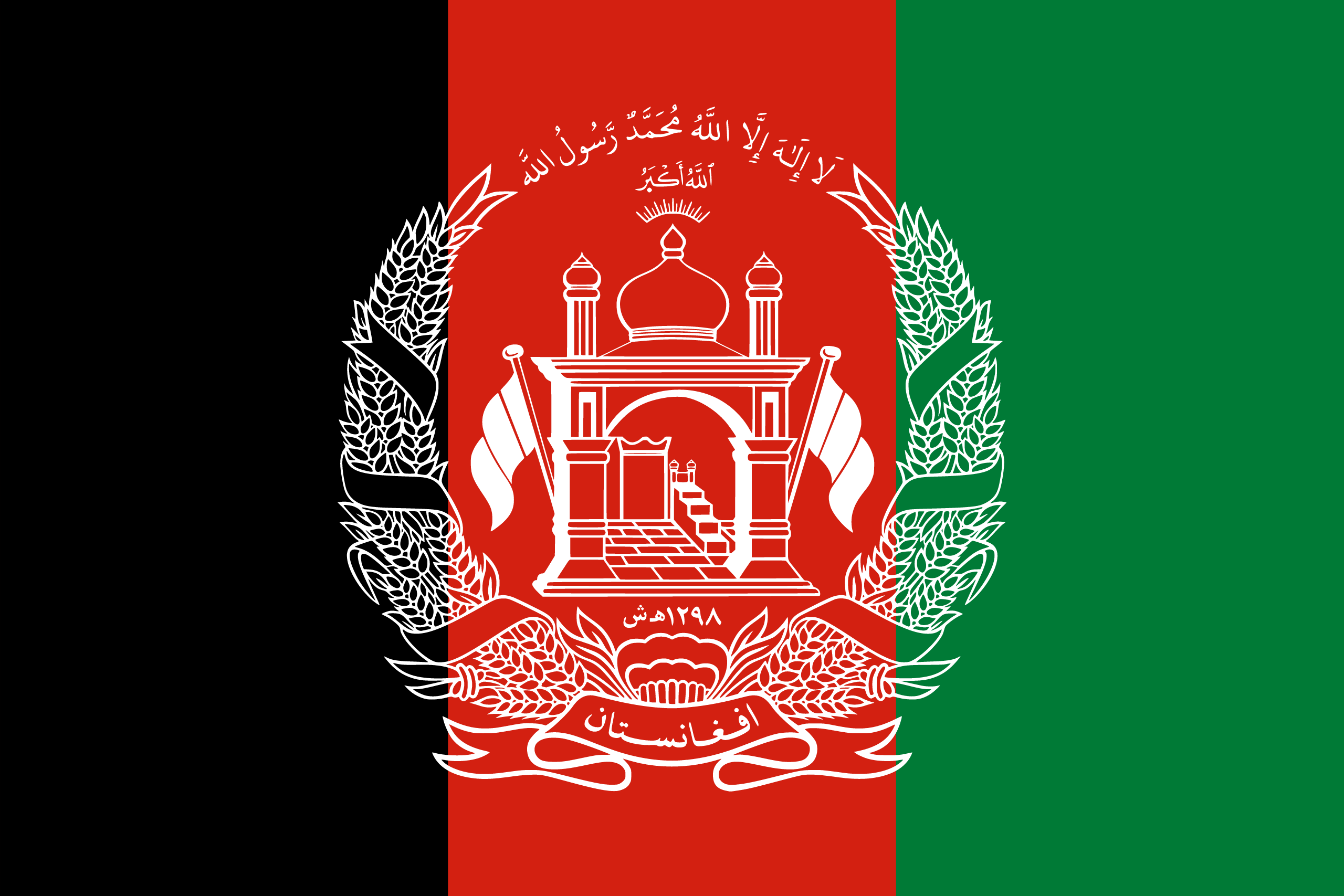 Government Type: Centralized Presidential system which consists of three branches of powers (executive, legislative and judiciary) and the president is the head of all three branches.

President: H.E. Dr. Mohammad Ashraf Ghani
Chief Executive Officer: H.E. Dr. Abdullah Abdullah
Foreign Minister: H.E. Salahuddin Rabbani
Geographical Locations: Afghanistan is a landlocked country located with South Asia and Central Asia and considers as a bridge connecting these two important geographic areas in Asia. Afghanistan has geographical connectivity with the Middle East.
Climate: Afghanistan has four seasons in terms of climate and mountainous terrain, dense forest and abundant water compared to its neighbors.
Area: 652,000 km2
Province: 34 (see list)
Demographics: The population of Afghanistan is around 29,117,000 and is the forty-first country in the world in terms of population.
Official Languages: According to article 16 of the consitution, Pashto and Dari are the official languages of Afghanistan; and in areas where the majority of people speak in Uzbek, Turkmen, Nuristani, Balochi and Pamiri languages; they are third official languages in addition to Dari and Pashto.
Currency: Afghani
Country Code: +93
Domain Extension: .AF

The Legislative Branch of Afghanistan

In addition to legislation, supervising the government performance and representing their client as well as their demands and needs are the main duties of the members of the National Assembly.

The sessions of the National Assembly shall be open and decisions shall be taken with the majority of votes of members present, unless the Constitution states otherwise.

Members of the House of People shall be elected by the people through free, general, secret and direct balloting for five years and have 249 members.

According to Afghan Constitution, at least two females shall be the elected members of the House of People from each province.

As the responsible of giving vote of confidence and non-confidence to the designated ministers, Supreme Court members, members of Independent Commission for Overseeing the Implementation of Constitution, Attorney General and Head of NDS, the House of People has the special right of  making inquiries and impeachment of the above mentioned persons.

Members of the House of People can incapacitate the ministers, attorney general and head of NDS with simple majority according to the provisions of constitution, but for the dismissal of the members of Supreme Court vote of no-confidence of simple majority is not enough and vote of two third of the present members is compulsory.

The House of People has the authority to establish a special commission, on the proposal of one third of its members, to review as well as investigate the actions of the Government.

The Loya Jirga is the highest manifestation of the will of the people of Afghanistan. The Loya Jirga consists of members of the National Assembly, Presidents of the provincial as well as district assemblies.

Ministers, Chief Justice and members of the Supreme Court as well as the attorney general can participate in the Loya Jirga sessions without voting rights.

The Judiciary of Afghanistan

As an independent organ of the state of the Islamic Republic of Afghanistan, the Judiciary is comprised of one Supreme Court in center, Courts of Appeal as well as Primary Court in provincial and district levels.

The authority of the judicial organ shall include consideration of all cases filed by real or incorporeal persons, including the state, as plaintiffs or defendants, before the court in accordance with the provisions of the law.

At the request of the Government, or courts, the Supreme Court shall review the laws, legislative decrees, international treaties as well as international covenants for their compliance with the Constitution and their interpretation in accordance with the law. No law shall, under any circumstances, exclude any case or area from the jurisdiction of the judicial organ and submit it to another authority.

In the Judicial System of Afghanistan in all criminal, legal and special cases, the Court process has three phases that is Primary, Appeal and Supreme Courts.

In the Judicial System of Afghanistan, criminal laws and regulations are based on the principle of territoriality.

In the courts in Afghanistan, trials shall be held openly and every individual shall have the right to attend in accordance with the law. In situations clarified by law, the court shall hold secret trials when it considers necessary, but pronouncement of its decision shall be open in all cases.

According to the Afghan Constitution, every accused has the principle right of defending himself/herself by his/her own or defense counsel against the claim of prosecutor. If a party in lawsuit does not know the language, the right to know the materials and documents of the case as well as conversation in the court, shall be provided in the party’s mother tongue through a translator appointed by the court.

In issuing decision, the court is obligated to state the reason for its verdict. All final decisions of the courts shall be enforced, except for capital punishment, which shall require Presidential approval.

Special law shall regulate discovery and investigation of crimes of duty by the armed forces, police and officials of national security.

The Executive Branch of Afghanistan

The Government of Afghanistan is comprised of 25 ministries, the Attorney General Office, Central Bank, National Security Directorate and other General and Independent Directorates and Entities, under the chairmanship of the President of the country.

The President shall appoint the Ministers, the Attorney General, the Head of the Central Bank, the National Security Director as well as the members of Independent Commission for Overseeing the Implementation of Constitution with the endorsement of the House of People. In case of attaining vote of confidence from the House of People, they will work as the head or responsible authorities of the administrative units in the framework specified for them by the constitution and other laws.

The Ministers and Heads of the Independent Directorates shall be accountable for their work to the President and the House of People.

Based upon the Constitution, the Executive shall have the duties of executing the provisions of this Constitution, other laws, as well as the final decisions of the courts; Preserve the independence, defend the territorial integrity and safeguard the interests and prestige of Afghanistan in the international community; Defend and safeguard the basic rights of the citizens; Maintain public law and order and eliminate every kind of administrative corruption; Prepare the budget, regulate financial conditions of the state as well as protect public wealth; Devise and implement social, cultural, economic and technological development programs.

Preserving the principles of centralism, the administration of the Islamic Republic of Afghanistan includes central administrative units such as the ministries, independent general directorates and entities in center and their representations are in the provinces and districts.

The government programs in various sectors shall be compiled by the central units each year that include the ministries, independent directorates and entities and after the endorsement of the National Assembly in the framework of annual national budget are implemented and executed in the provinces by the representatives of the ministries and independent entities.

For the better coordination and management of the provincial affairs, as the direct representative of the President, governor is the head of local government and accountable to the President.

Role of provincial council in each province and district council in each district, as elected entities, shall be to counsel the local administration regarding the implementation of the government programs.

In the cities, the mayor and members of municipal councils shall be elected through free, general, secret and direct elections whose responsibility are to manage and provide municipal services.

Source: Official website, Ministry of Foreign Affairs of the Islamic Republic of Afghanistan

Afghanistan at a glance